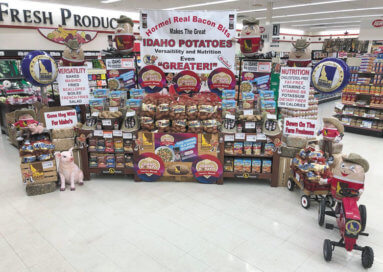 
This Idaho Potato display was designed by Rosella Elliott, who is an employee of the Versailles Hometown IGA Store in the produce department. The display took first place nationwide this year and Bobby and Dottie Wood are proud of not only this display, but how the Versailles store is progressing since they bought it seven years ago. Bobby says he’s not a “grocer” by trade, but has quickly turned into one and he loves every minute of it.

Versailles Hometown IGA prize winning Idaho Potato display was featured in the June 2019 issue of The Shelby Report of the Midwest, which is a magazine all grocery stores are familiar with.

When talking with Robert (Bobby) Wood about the latest honor of winning first place for their Idaho Potato display, Wood said he is proud of the employees and their efforts to make the store the best it can be.

Wood said Rosella Elliott, who works in the produce department, designed the display, and has placed in the contest in the past four years, but this is the first time to be first!

Wood doesn’t put much stock in being first- but it does feel good. He puts stock in making sure he has a well-run store that provides what the people in the area needs. He wants to be sure they have a clean place for people to shop for quality food that offers a hot deli, fresh meat, and a good produce department.

Being a contractor for many years, Wood never guessed he would be a grocer. His wife, Dotty, had a bulk food business in a 3,000 ft. space, but that was the extent of his knowledge of the business. The irony of his now owning the Versailles store, is that he actually worked on the earthwork for the structure. It’s kind of a “full circle” experience for Wood, who says when he got ready to buy the store, he thought it would help with his daughter, Bridget Back’s vision of covering the area with the Child Evangelism Fellowship program. It was just that simple. He didn’t buy it for a profit.

He told The Versailles Republican that he is not afraid to show his faith, which is reflected in the music you hear as you enter the Versailles store. Also, at Easter, a three-cross display has been featured in an issue of this newspaper.

The family oriented Wood, had the support of his wife and children – Kelly Gutzwiller, Daren Wood, and Bridget Back. He soon learned he had the support of the community who wanted and needed their hometown store.  A story Wood has told many times is one of when he saw a little lady riding her motorized cart to the store. “I looked over at my wife and said, ‘right there is the reason that you’ve got to keep a store in the town.’”

Most of the 2400 people in the small town of Versailles know where the Versailles Hometown IGA is located and they know the owners too. Wood is in the store six days a week and he is out on the floor restocking groceries or talking with customers. He knows where things are located and makes it easy for people to find what they need. He doesn’t care about making a fortune, he just wants to make sure the store is solvent, and people can get what they need right at home.

At the age of 64, he says he doesn’t know when retirement will come, if at all. He just knows he will keep working until he finds that special person who could operate the store in the manner he feels the customers are satisfied with.

In the meantime, Wood will keep stocking shelves, making sure good food is available, and keeping the prices as competitive as possible. The store will also keep grilling out in the summertime and having hot daily lunch specials in the deli.

The store is located on US 421 south of the intersection of US 50/421 at 1004 S. Adams St. Stop in and say hello to Wood and his crew – and let them know you appreciate their dedication to the community.