Versailles swears in officer, board member, and celebrates attorney 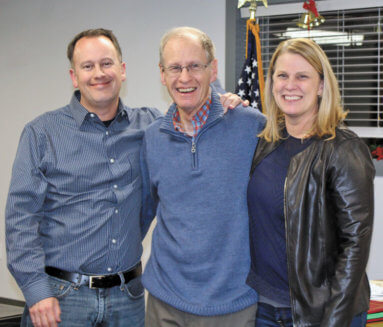 
Attorney Larry Eaton, center, was surprised by his children, Nick of Carmel and Kristy of Greenwood, after he finished his last board meeting with the Town of Versailles.

First on the agenda for the Versailles Town Board meeting held on Tuesday, December 10 was the swearing in of Josh Combs, new town board member, and Cody Buchanan, new deputy marshal.

Another change that was celebrated at the meeting was the retirement of Attorney Larry Eaton, who had served for 29 years, and the hiring of Lynn Fledderman as the new attorney for the town. “You’ve been a great group to work with,” noted Eaton. There were many kind words of appreciation from the Board and from those in attendance. The Board noted, “You will be missed.”

Eaton graciously accepted a plaque from town board president Steve Mathes thanking him for his years of service. Another surprise awaited Eaton, as his son, Nick from Carmel and daughter, Kristy, from Greenwood, came to the meeting. Cake and punch were served at the end of the meeting.

Business for the evening included a change in meeting nights. The next meeting will be the second Thursday of January and will continue on Thursdays for the year 2020. The time of 7:00 p.m. remains the same.

Robert Curry with Curry & Associates was at the meeting to explain about the new water main that the town needs done. It’s a large project that will include the road by the schools, loop around Harvest Ridge Subdivision and include the old and new industrial parks. This will improve water quality and fire protection, according to Curry. He said they need 12-inch pipe instead of what is in place, which is six-inch pipe. The group discussed ways to pay for the project, which is estimated around $735,000.

Chief Ben Sieverding gave his report saying they had responded to 36 calls during the past month with two fatal accidents. He also noted that the township hasn’t paid the fire department their allotment of $14,000 yet, which runs them in the red.

Mary McCarty and Jodi Comer with SIRPC were at the meeting talking about the State extending a deadline for grant money to be used and saying they would help in any way they could on the upcoming water project.

Kevin Hensley, maintenance supervisor, noted that the Washington Street and hiking trail projects will be completed in the spring. He said he had ordered a part for the leaf machine and the Christmas lights were up throughout the town. Randall Miller has been hired at the water department.

Marshal Joe Mann gave his activity and ordinance violation reports. He discussed the ordinance violations with the board, saying some places were getting cleaned up, but others seem to be in the same bad shape as before. He noted that the new deputy marshal has been accepted into the police academy beginning in January. “Glad to have you on board,” Mathes told Buchanan.

Board member Roxanne Meyer thanked the fire department for leading the parade for the Holiday Affair on the Square, which she said went well. “We appreciate all you do,” she said to Sieverding, adding, “Thank you for getting Santa safely into town.”