Versailles takes action on clean up 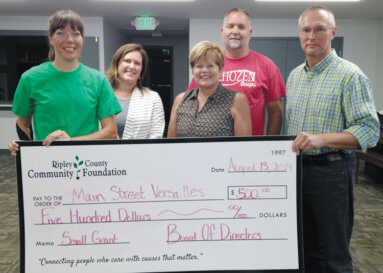 
Pictured from left Holly Harley with Main Street, Amy Streator, executive director of the Ripley County Community Foundation, are pictured along with Roxanne Meyer, Matt McNew and Steve Mathes, Versailles Town Council. The check for $500 was from the RCCF Small Grants to Main Street Versailles.

Cleaning up the town of Versailles has been a goal for the present town board. They have worked hard to get residents to clean up their properties. But, sometimes, people do not comply with the rules. That is the case in the William B. Dougherty property at 234 South Main Street. After much debate, with the board members extending a hand to work with the property owner, it has become a legal matter.

Larry Eaton, attorney for the town, filed a Complaint to Demolish Unsafe Building and Abatement of Nuisance in Ripley County Circuit Court. The court records read that under the Unsafe Building Code, adopted on November 12, 2009, the property owner has allowed vegetation on the property to become rank and excessively vigorous. It also sites that the “roof and porch have deteriorated to the point that they are in danger of collapse and total failure”.

On May 19, 2019, the town sent the Unsafe Building Code Order to Dougherty’s Indianapolis address by certified mail, return receipt requested, but, nothing has happened. The town board has gone above and beyond to try to make contact with the owner and get the situation resolved before it came to going to court. “I hate for it to come to this,” noted Roxanne Meyer, board member. “This is where we are,” noted Eaton, who said he filed in court earlier in the month.

At the regular town board meeting held Tuesday, August 13 the board took under consideration bids from two trash hauling companies- Rumpke and Best Way Disposal. At the present time the town has Rumpke and the trash is picked up two times a week. Residents are supposed to be able to put out one heavy item weekly, but Kiersten Libby, clerk-treasurer, said, “It is not being honored”.

Board members are taking all the prices into consideration and are also looking at recycling options. They will make a decision this month before the contract runs out with Rumpke. They are looking at every option, even one that would only have trash pick up once a week.

Versailles Fire Chief Ben Sieverding gave his report saying they had responded to 37 calls since the last board meeting, with a total of 323 for the year so far. They’ve had three vehicle accidents to cover, two CPR runs, overdose runs, and a barn fire to name a few. Seven firefighters have completed additional levels of training.

Sieverding noted that the department is hoping to use grant money in the amount of $1860 for extrication gloves. He also noted that they are in need of repairs for the Rescue Truck and self-contained breathing apparatus equipment updates. He reported they are having a live training house fire on October 5 and are securing all the proper paperwork through IDEM for the training.

Attorney Eaton congratulated Sieverding for serving on the Indiana Fire Chief’s Association Board of Directors. He is the only volunteer firefighter on that board. He also is District 19 Chairman of the Indiana Volunteer Firefighter Association with Randy Hornsby being the secretary-treasurer for that organization. District 19 covers: Franklin, Ohio, Dearborn, Switzerland, Jefferson and Ripley counties.

Amy Streator, executive director of the Ripley County Community Foundation, was at the meeting to present MainStreet with a $500 grant check. Holly Harley with MainStreet spoke and said they would be hanging light post banners around the square. She said the banners would have information letting people know of the various activities that MainStreet promotes throughout the year, and what the town of Versailles has to offer.

Residents Wayne and Bev Miller were back at the August meeting to follow up on July’s meeting concerning stop signs, their memory tree, and patrolling at Pangburn Park. Steve Mathes, town board president, told them he would get with them to talk about some of the items on the list, but said the stop signs are being worked on, and Deputy Marshal Eddie Rodriquez said he has been patrolling the park.

Ordinance 2019-0, had the second reading. This was concerning the 2020 budget for the town. This will be heard again at the next meeting and voted on.

Meyer gave an update on MainStreet and noted that they have partnered with Ripley County Tourism and with a $1500 grant from Humanities they will be putting together a South Ripley school consolidation display. This will be on display during the Versailles Pumpkin Show next month in the town hall. It will include all of the schools involved in the consolidation in 1963.

The next regular board meeting for the town will be September 10 at 7:00 p.m. in the town hall building.