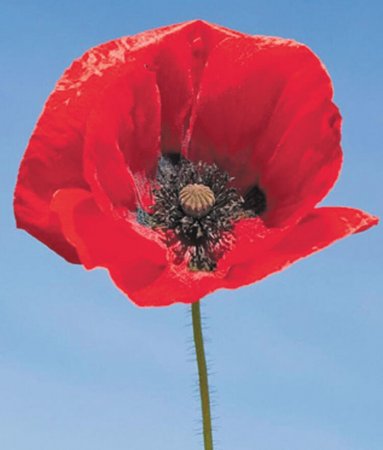 From the battlefields of World War I, weary soldiers brought home the memory of barren landscape transformed by wild poppies, red as the blood that soaked the soil. By that miracle of nature, the spirit of their lost comrades lived on.

The poppy became the symbol of the sacrifice of lives in war and represented the hope that none had died in vain. The American Legion Auxiliary poppy has continued to bloom for the casualties of four wars, its petals bound together for veterans by veterans, reminding Americans each year that the men and women who have served and died for their country deserve to be remembered.

The poppy, as a memorial flower to the war dead, can be traced to a single individual, Moina Michael. She was so moved by LT. Col. McCrae’s poem, “In Flanders’ Fields,” that she wrote a response:

…the blood of heroes never dies

But lends a luster to the red

Of the flower that blooms above the dead

On impulse, she bought a bouquet of poppies – all that New York City’s Wanamaker’s Department Store had – and handed them to businessmen meeting at the New York YMCA where she worked. She asked them to wear the poppy as a tribute to the fallen. That was November of 1918. World War I was over, but America’s sons would rest forever “in Flanders’ Fields.” Later, she would spearhead a campaign that would result in the adoption of the poppy as a national symbol of sacrifice.

This year on May 17 and 18, the Versailles American Legion Auxiliary ladies will be asking you to wear the poppy as tribute to the fallen. The memorial poppy is never sold, but given in exchange for a contribution.

Speaking for the Auxiliary, Nancy Durham reported that so far in 2019, over 20 packages have been sent to active military members with more mailings planned. The Auxiliary has also visited veterans in Madison, Indiana and surprised the men and women there with special gifts.

The Man Who Made This Little Red Flower

A man walked down the street the other day. The ladies of the Auxiliary came his way. He took a poppy and gave them a dime. He mumbled, “Why do they take up my time?”

He put the poppy in the buttonhole of his coat, next to some pencils and other notes. When he got home he placed the poppy on the table, that red paper flower with a little white label.

As he looked at the flower, as if inspired, he wondered, “Who put this flower on this wire?” He’s probably a man who once stood tall, and for his country he gave his all.

He might once have piloted a plane, now gives his all just to walk with a cane. His strong hands were a sense of power, now he makes this little red flower.

In our world we are busy with money and power, while this man’s job is this little red flower. He still takes pride in what he has to do; petal by petal he makes this flower for you.

Next year when it comes to Poppy Day, I’ll be glad to see the Auxiliary come my way. I’ll cheerfully give to them generously, for the veteran making this flower could have been me.