Weather is perfect for Pumpkin Show 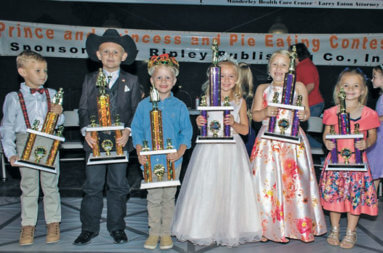 From the first day of the 117th Versailles Pumpkin Show until the last day, the weather was absolutely beautiful. Crowds came out and people seemed to enjoy the oldest festival in Indiana one more time. “We hit the jackpot with the weather,” noted Ryan Holcomb, who co-chairs the event with Paul Sipples of the Versailles Lions Club, who sponsors the Show.

Holcomb said there are so many people to thank who stepped up to help this year. “This little community really shows up when it’s needed,” he said, saying it takes many more hands than just the Versailles Lions Club members and he is grateful for all the volunteers. The Milan Lions Club teamed up with Versailles, working side by side to make the Show a success. There are many behind-the-scenes volunteers who are not Lions Club members, who simply step up and volunteer. “It’s very humbling when Lions Club members walk into a business and come out with a big check [to help with expenses],” he noted. All of the proceeds made are put right back into the community.

Growers of the big pumpkins, which the Show is famous for, never know how their pumpkins will turn out. It depends on a lot of things with weather being in the forefront. Even thought this season started out rainy and then turned off dry, Phil Thorrington of Peru, brought the winning pumpkin at 961 pounds! He was followed by Brandon Fisk, Brookville with a 812 pound pumpkin, followed by Lexi and Jacob Stevens, Shelbyville, who had a 528.5 pound pumpkin in the Open Class.

In the Youth Class, Sydney Huff of Deputy raised a 455 pound pumpkin, Lily Welch of Versailles had a 290 pound one and Jackson and Ryker Stevens of Osgood, came in third for their 120.5 pound pumpkin. That’s 3,167 pounds of pumpkin!

When Holcomb received a call at 11:00 a.m. that the 2:00 entertainment for Saturday wouldn’t be coming due to illness, he put his feelers out. “Within a few minutes we had a great band, Jeff Byard’s band, and Faith Lafary, who filled in the slot to delight the crowd.” He said, “Things like that you don’t anticipate, but this community comes together whenever they are needed.”

The King and Queen and their court were crowned on opening night. Jessica Starkey of Milan and Sam Evans of South Ripley took the Queen and King spots. Their court consisted of Lilli Hilton, South Ripley and Carter Wade of Milan, first runners up; and Faith Sullivan, Oldenburg Academy and Tyler Baker of South Dearborn, second runners up.

Behind the scenes on that night, Holcomb’s wife, Rachel, along with Heather Saylor of Edward Jones and Marie White with Gilpin’s Monuments, worked with all the queen and king contestants. The Gooseberry Flower Shop provided the stage decorations.

Winners of the Ripley Publishing Co. Pumpkin Baking Contest were named on stage with the overall $200 winner being Carol Jines of Holton for her award winning bread rolls, that of course included pumpkin as an ingredient! She was also awarded a plaque and had her photo taken with Linda Chandler, publisher of the Osgood Journal and The Versailles Republican newspapers. Winners of the annual Pumpkin Pie Eating Contest, were Gage Unrath, JCD and Alexis Smith from the Southeastern Career Center. Watch for photos of all the winners of the baking contest in Thursday’s paper.

Saturday’s parade did not disappoint the many people who lined the streets of Versailles. It was led by Versailles Marshal Joe Mann and Eddie Rodriguez, followed by the Versailles American Legion Color Guard. Rodney Mathews of Vevay, formerly of Versailles, sang The National Anthem acappella. This year there were 104 entries in the parade with The Napoleon State Bank taking first place in the Business Float category; George’s Pharmacy was second and Versailles Farm and Garden, third. In the Church Float category: Shelby Christian was first, St. Paul Lutheran, second and CrossRoads Wesleyan placed third. In the Youth/Organization category, Friends of Versailles State Park was first, Ripley County Humane Society, second and Jackson Street Academy was third. In the Schools category: Jac-Cen-Del and Milan FFA placed first, South Ripley FFA second and Southeastern Career Center, third.

Holcomb noted that he is so thankful for all the people who came together to make this monumental event good for everyone. From the Ripley County Soccer Club who manned the ticket booths to those who were willing to allow people to park in their yards to the emcees of the parade, Linda Chandler and Wanda Burnett, he was thankful for everyone who volunteered.

EDITOR’S NOTE: Watch for more photo coverage of the Versailles Pumpkin Show in The Versailles Republican this week.