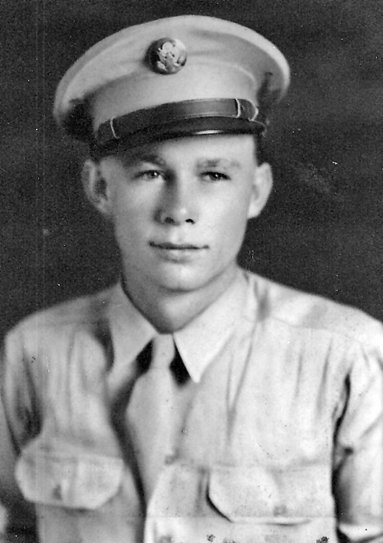 Ralph Hermesch, 93, has a philosophy that has worked well for him all these years. He says he’s had a full life, worked hard, and “if you’re gonna’ do a job – do it right!” He was raised around the St. Maurice area and now resides in the rural countryside near Millhousen. He said as a kid growing up most people were poor and corn was a penny a bushel. “Times were different-people were different,” he reflected, saying once his mother sent his brother to the store, which was about a mile and a half away, on his tricycle to get chocolate! He said it was a gravel road.

When Ralph was a teenager he said kids went to work on the farm, helped their parents or did whatever job they could to make ends meet. “It was during the depression, and we all just had to work.” At the tender age of 16, he left home and went to Dayton Ohio, where he worked at Wright Patterson Air Force Base as a civilian. Then, when he turned 18, Uncle Sam called. He was plunged into World War II and took his initial training at Camp Walters in Texas.

The trip from here to Germany was one he described as grueling, and said he was “seasick every day”. The ship would sway and dip with the ocean currents and there was nothing but water as far as the eye could see. But, that wasn’t the worst Ralph would see. When he arrived in Munich, Germany, he was sent to the town of Dachau, which was about 10 miles northwest of Munich. There the infamous Dachau concentration camp was located. This was established by the National Socialist Nazi government and it is known as the first concentration camp for political prisoners.

“It was a horrible place – so many dead bodies” was all Ralph could say before he became emotional about the horrors of war that he was exposed to upon arrival in Germany. He couldn’t really talk more about the Dachau Camp, only saying thousands, yes, thousands of people died there. He couldn’t dwell on such a horrifying thing that people would do to each other.

Ralph was raised in a farming family, went to mass every Saturday night, and couldn’t imagine war on the level he was exposed to. “Well, really, none of us knew what war was, we were just kids,” he noted.

While Ralph respects the people who lost their lives for no reason, he didn’t dwell on something he couldn’t do anything about. At one point in his stint in the Army he was in Stuttgart – home of Mercedes-Benz. “Now that was something,” he remembered, saying he had a Master Sergeant who owned a Mercedes and he let him drive it. While serving in the Army, he was a Mess Sgt., taking charge of the kitchen duties and serving 680 meals every day. There he met a girl from Czechoslovakia. “She was really nice,” he said as his eyes twinkled. But, alas – he lived through the war torn area he served in and thanks to President Harry Truman, he came home. “I love that man,” he said as he pounded his fist on the table in the home that dates back to the 1800’s. “He dropped the atomic bomb on Japan, and that was it!” The war ended and soon Ralph was on his way home. But, not before he was able to take some time off and visit the countries of Switzerland, Rome and more.

Something that was sad to Ralph, was the fact he is of German descent and some of his relatives were fighting in the same war. “It doesn’t seem right,” he noted. He went back to Germany in 2009 to visit and saw relatives and the old church where his great grandfather was baptized. He said he wouldn’t trade that experience for a million dollars.

When Ralph returned home from his tour of duty, he didn’t dwell on the past. He forged ahead, took courses from Purdue University on the GI bill and married Marie Hodapp in 1951. Together they raised nine children. His family is important to him. He is proud that every one of them has careers, are hard working and upstanding people. He is also proud of his grandchildren, 22 in all, and great grandchildren, which number 34.

His family makes his eyes twinkle when he talks about them and raising corn is another heartbeat of his. He said he specialized in raising corn and once produced 150 bushel per acre, which is nothing now, he says. “Back then, it was huge.” He farmed no less than 300 acres, drove a school bus and sold Funk’s Seed Corn and woodstoves.

Ralph still lives on the family farm he bought from his father and is surrounded by 233 acres. He says the best thing he and his wife did was to travel to all 50 states and took a cruise to Alaska. He’s flown in a helicopter over Mt. Rinear and saw the Northern Lights. His mother and father, Robert and Kathryn Hermesch married in 1924 and Ralph is the oldest of four brothers, Walter of Napoleon; Don and Bobby, who live in the Greensburg area.

Last year he made 86 bluebird houses and has given them all away. It’s a hobby that keeps him busy. He also does crossword puzzles everyday and has a certain type he likes. He says he’s lived a “full life”.

When Ralph was 79-years-old, his doctor told him he needed a little more exercise. So, he didn’t hesitate. With his daughter-in-law, Cindy, who was already walking daily, he joined in and soon was walking four miles a day. “We’ve walked over 25,000 miles,” he laughed. He says longevity runs in his family and remembers an aunt who lived to be 104. He says he drinks a little Jack and water every day, and stays active, when asked the secret to living a long life. He wasn’t sure if there was a secret to living a long life, but admitted, “I didn’t behave all that well and smoked a pipe!” (That was a younger Ralph.)

Editor’s note: Dubbed as The Greatest Generation, those who served in World War II are a humble group. When I have interviewed them, they are never sure why their story is significant. However, this generation helped free the world from tyranny and like veterans of other wars, feel like they just did what they were called upon by their country to do.