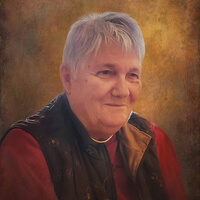 Mrs. Connie Jean “Con” Scott Gabbard, age 78, of Cross Plains, Indiana entered this life on December 31, 1942 in Jefferson County, Indiana. She was the daughter of the late John R. and Irma M. Heiderman Scott. She was raised in Cross Plains and resided in the same home for her entire 78 years. She graduated from Cross Plains High School and was a member of the Cross Plains Baptist Church. She worked early in life for the U.S Shoe Corporation in Vevay and for the Halcomb family as housekeeper. She retired after 28 years of service to the South Ripley School Corporation where she was a custodian. She was united in marriage to William “Bill” Gabbard on November 2, 1974 in Tennessee. She was blessed to raise her children, Marsha, Ed, Mark, Lisa, Andy, and Billy. Connie loved mowing her lawn, raising beautiful flowers and gardens. She enjoyed coaching softball for five years and teaching her children to play softball. If Connie wasn’t home you would find her hanging out and socializing at the Cross Plains Store. Connie enjoyed being a mom and grandma and never met a stranger. Connie died on Tuesday, July 6, 2021, at 8:45 p.m. at the Margaret Mary Hospital Community Hospital in Batesville, Indiana.

Memorial contributions may be made to the South Ripley School Corporation. Cards are available at the Morgan & Nay Funeral Centres of Madison and Hanover. Remembrances, condolences, and memorials can be left at www.morgan-nay.com.