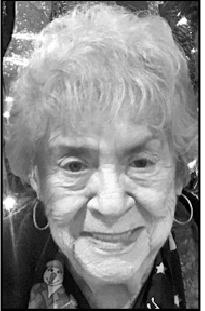 Glenna Marie Ward, age 81 passed away on August 3 at her home. Glenna was born on November 18, 1939, the daughter of the late James and America (Dezarn) Grills in Batesville. She grew up in the Benham community along with her brothers and sister.

Upon completion of school Glenna met Bernie Ward of Osgood, and they were united in marriage on April 22, 1961. They were blessed with son Randy. Glenna was clear to state Randy was the sunshine of her life. However, tragedy struck on June 6, 1980, as Randy was taken from this world. It would leave a void in her heart for the remainder of her life.

Glenna was laid to rest along side Bernie and Randy at St John Catholic Cemetery. Visitation was held on Friday August 6, 2021, from 4-7 pm. at Neal’s Funeral Home. Rosary services were held on Friday at 3:30 pm. Funeral Mass was held on Saturday August 7 at 10 am. at St John’s Catholic Church. Memorials can be given to St Jude or the Shriner Children’s Hospitals in care of the funeral home. Online condolences can be placed at Nealsfuneralhome.net.