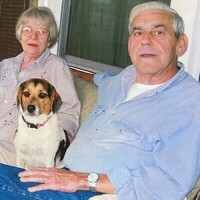 Margot Margarete Hoyer Berry, 74, of Madison, Indiana entered this life on January 20, 1947 in Markneukirchen, Germany. She was the loving daughter of the late Walter Valentin and Berta Wild Hoyer. She was raised in Germany and schooled there. She was united in marriage to Ronald Ray Berry on June 20, 1969 in Erlanger, Germany while he was serving in the United States Army. She became a naturalized citizen of the United States on August 18, 1975. She worked at the Silver Bell Nursing Home near Versailles, Indiana, the U.S. Shoe Corporation and also worked in the dietary department at King’s Daughters Hospital until she retired. She was raised Catholic and after coming to the United States, she became a member of the Cedars of Lebanon Church in Dearborn County. Margot loved sitting on the front porch with her late husband, Ron and their dog, Lucy. Going out to dinner and socializing with friends and family was a highlight of her day. Margot suffered a massive stroke in 2014 and was lovingly cared for by her sister in law, Carol and other family members until her death. She dearly loved the care she received from the staff of Hickory Creek and the residents became her dear friends. Margot died on Tuesday, March 2, 2021 at 10:02 p.m. at the Hickory Creek of Greensburg in Greensburg, Indiana.

Margot will be missed by her loving sisters-in-law, Phyllis Sue Combs and her husband Don of Redington Beach, Florida, Carol Berry of Cross Plains,Indiana and Joyce Berry of New Marion, Indiana; several nieces, nephews and other relatives. She was preceded in death by her beloved husband of 44 years, Ronald Ray Berry in May 18, 2013; her parents, Walter Valentin and Berta Wild Hoyer; her brothers in law, Danny Berry, David Berry, Bill Berry and Dale Berry; her father in law and mother in law, Otis and Gladys Berry.