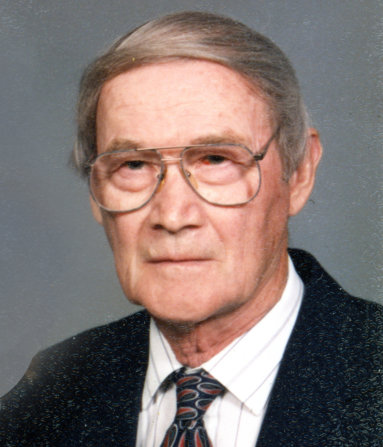 Mr. Robert Samuel Fisse, age 94, of Madison, Indiana, entered this life on January 14, 1926 in Cincinnati, Ohio, the son of the late Frank and Olga Lomatsch Fisse. He was a graduate of Withrow High School in Cincinnatti, Ohio and attended Ohio State University. He enlisted in the United States Army Air Corps on December 14, 1943 and served his country during World War II, receiving the American Theater Ribbon, Good Conduct Medal, and the World War II Victory Medal. He was honorably discharged on June 5, 1946. He was united in marriage to Hope LaVonne Hooton on January 9, 1954 at Saint Paul Lutheran Church in Olean, Indiana and to this union came a son, Jeff, and a daughter, Jana. He was a dairy farmer early in life and later worked for Monsanto in Cincinnati, Ohio, and M & T in Carrollton, Kentucky. He also served as an inspector for the Jefferson County, Indiana Health Department and retired from the sales department of Master Products. He was also a long-time member of the Faith Lutheran Church in Madison, Indiana. Mr. Fisse died on Wednesday, August 26, 2020, at 8:30 p.m. at Hickory Creek of Madison in Madison.

Mr. Fisse will be missed by his wife, Hope LaVonne Hooton Fisse of Madison; his son, Jeff Fisse and his wife Anne of Madison; his grandchildren, Andy, Jessey (Jon), Derek (Jordan), Jarrett (Sonja), Sam (Kelly), and Hana (Kent); his great grandchildren, Nic, Maizey, Beau, and Juliann. He was preceded in death by his parents, Frank and Olga Lomatsch Fisse, and his daughter, Jana Ann Mason died on October 24, 2010.

At Mr. Fisse’s request, all services are private. Interment will be in the Saint Paul Church Cemetery in Olean. Memorial contributions may be made to St. Paul Church Cemetery. Cards are available at the Morgan & Nay Funeral Centres of Madison and Hanover. Online condolences, www.morgan-nay.com