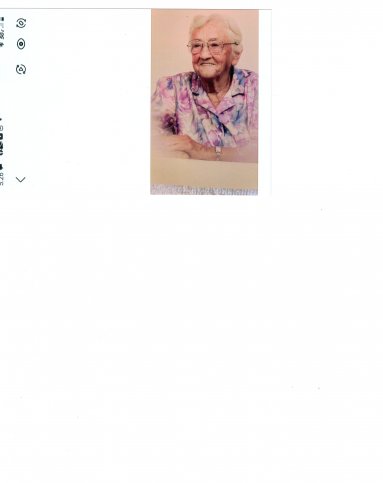 Survivors include one son Elmer (Betty) Naylor of Holton; grandson Danny (Alice) Beach of Holton; granddaughters Brenda Beach, Debbie (Paul) Hughes, Deanna (Mark) Salyers, and Carol (Paul) Jines all of Holton, and Connie (Chris) Demaree of Cross Plains; 18 great-grandchildren, and 28 great-great-grandchildren. She was also preceded in death by her daughter and son-in-law Ruth Beach and George Beach, her brothers Walter and Daily Renfro, and her sisters Bertha and Laura.

Zelpha’s life touched many people, spanning 10 decades. When she was born, William Howard Taft was president and as a child she attended the Brown School in Otter Creek Township, now part of the Jefferson Proving Ground. During her life, she lived through the Great Depression, both World Wars, and saw transportation go from the horse and buggy to automobiles. She worked as a cook at the Holton School and also worked in housekeeping at Muscatatuck. In the community Zelpha was known as the “Pie Lady”, making pies to sell at Goin’s Auction in Butlerville and also at the farmers market in Osgood. Nobody knew for sure how many pies Zelpha made in her lifetime, but she continually perfected her art until age 107. Zelpha was a member of the former Bible Covenant Church in Holton.

Funeral services will be held on Friday, October 8th at 11am at the Stratton-Karsteter Funeral Home in Versailles with Rev. Michael Miller officiating. Burial will be in the Holton Cemetery. Visitation will be on Thursday from 5pm to 7pm. Memorials may be given to the Holton Cemetery in care of the funeral home.